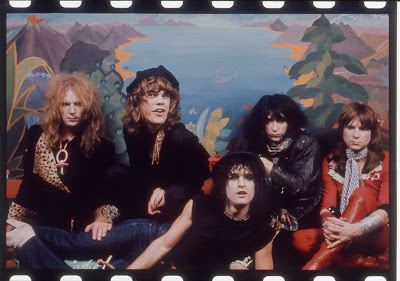 In Queens, a part of New York City, Johnny  lives at 25-62 83rd Street in the basement with his sister and mother.

From the Newtown High School a band sometimes loosely referred to as ACTRESS (ARTHUR KANE, BILLY MURCIA and RICK RIVETS), are joined by one JOHNNY VOLUME, later THUNDERS, as bass-player.

At rehearsals, Rick Rivets starts a tape-recorder to try to hear what they're doing with Johnny's songs and first vocal attempts. Many years later, this tape is exhumed for analysis on a CD release, 'Dawn Of The Dolls'. (Some rough tunes now sound familiar, as later they've developed into Subway Train and So Alone.)

Rivets is replaced by SYLVAIN SYLVAIN. They change their name first to THE DOLLS.... then Thunders adds 'NEW YORK'.

Towards the end of the year, DAVID JOHANSEN, then vocalist of the VAGABOND MISSIONARIES, joins the NEW YORK DOLLS.

December:
The New York Dolls rehearse at Rusty's Beanies Bike Shop, overnight.
The Dolls first ever performance is a Christmas Party at the Endicott Hotel, filling in for a cancellation, they play a set of R&B and soul covers.

..Fantastic website..I tour constantly and kids are always asking about John..I was lucky to see at least 35 Johnny Thunders shows in NYC from 1981 -90..He and Jerry were always nice to talk with..True Rockin Roll Idols !!.myspace.com/kevinkrock

Hey,
i grew up with Johnny in East Elmhurst, Queens, which some people call Jackson Heights. he lived at 25-62 83rd street in the basement with his sister and mother. queens is part of nyc not a suburb. the correct name of the high school you mention is Newtown High School. Last time I saw Johnny he was about to play a Fender telecaster at his sister's wedding reception at a Knights of Columbus hall on 31st Avenue and 79th Street in East Elmhurst.

Great blog. Really fantastic. Thanks for sharing these stories. This stuff is priceless.

on a different topic: to the poster that wrote ''queens is part of nyc not a suburb''

yeah, but some people (i.e New Yorkers born and raised in Manhattan) would still dispute that statement, albeit factually correct - LOL

HEY BOYS, I HOPE YOU ANSWER ME. I AM FROM CHILE. WE SPEAK SPANISH. SO, I'M THINKIN' IF YOU CAN WRITE SOME JOHNNY'S SONGS FOR US. I LOVE JOHNNY'S MUSIC BUT I CAN'T UNDERSTAND SOME LYRICS. PLEASE, ANSWER.

maddox pax said...
This comment has been removed by a blog administrator.
July 06, 2018

I think all of us in a local band played at the KofC there. Wow! Long time ago! That was in '66. I went to grammar school with Johnny one block away- Our Lady of Fatima. Johnny was a "punk" even way back then. He was the real deal.

Those who were with us at Newtown High and Knew Johny, Billy, Sylvain, Gene Klein, Bob, and Bruce Kulick who hung out at the Cafeteria and fought at the Gym as well as came to all the shows at the singer bowl and later over to the pavilion. Reach out to me...John Stavros Finishing up my book about the 60s that tells the truth of when we were poor kids from Queens.