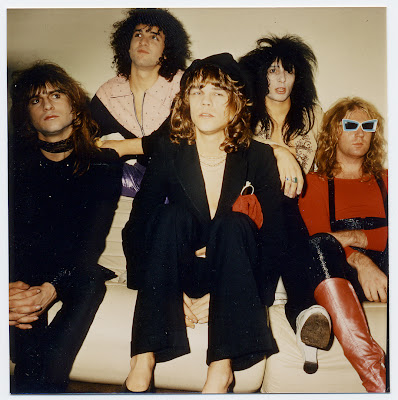 April:
Support slots start in the Oscar Wilde Room (cap. 100) at the Mercer Arts Center, Mercer Street, Greenwich Village, NYC. They get noticed, start to steal the show, and gain a residency on Tuesday nights.
June:
They're picked up by former plugger and Paramount A&R man MARTY THAU, who takes them to record demos - nine tracks that are later released on ROIR firstly on cassette, then on LP & CD, as 'LIPSTICK KILLERS'.
Shortly afterwards he enlists booking agents STEVE LEBER and DAVID KREBS who've just left the William Morris agency. All three set up Dollhouse Productions and Lipstick Killer Publishing. Thau deals with the band, press, recordings and promotions, Leber and Krebs deal with accounting, tour booking and legals.
July:
The New York Dolls play their first 'official' gig, at the Palm Room at the Hotel Diplomat on W.43rd St. (or: late May; 2 weeks later opening for Eric Emerson's Magic Tramps at Mercers; says Wicked Ways of M.McLaren.)
The Dolls now become the 'in' group to see at their residency at the Mercer. Various stars come to see them: David Bowie, Alice Cooper, Todd Rundgren, Bette Midler, John Cale, Lou Reed, etc. September:
UK Melody Maker journalist Roy Hollingsworth writes a rave review (or was it July, as it says in Wicked Ways?) of the Dolls' Mercer St gigs... the buzz reaches Rod Stewarts' management who decide they sound just right for a support slot with Rod at the massive Empire Pool (now named Wembley Arena).
October:
The New York Dolls arrive at Heathrow, London, and are met by a horse and carriage that takes them to the Essex Hotel.
?th: Play with Rod 'The Mod' at the Empire Pool.
?th: Record demos at Escape Studios, Kent; there's big interest in the UK for a record deal; maybe these demos would secure it. These tapes are later released over and over without the band's knowledge- on Bellaphon, Kamera, See For Miles, etc. - no doubt the sessions having never been paid for.
November:
6th: Billy Murcia dies, at age 18, of drowning in a bath whilst drunk.
Thau, Leber and Krebs hear the news whilst discussing signing to The Hendrix & Who label Track Records with Kit Lambert and Danny Secunda. Suddenly everything is suspended.
7th: The planned Manchester Hardrock gig is cancelled, and they all fly back to New York on a 7.00 am flight, devastated.
December:
JERRY NOLAN fills the vacant drummer stool, and performs his first gig with the band … there's a Jerry anecdote of this somewhere.

blasties said...
This comment has been removed by a blog administrator.
September 13, 2019