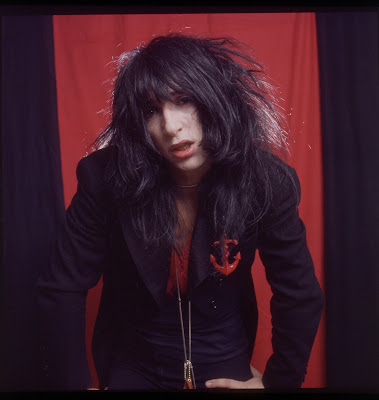 March:
20th: The New York Dolls sign to Mercury at the instigation of A&R man PAUL NELSON.
April:
It takes just a week to record their debut album, with Todd Rundgren producing.
July:
27th: "New York Dolls" album is released. It peaks at no. 116 in the Billboard chart.
28th: The band embark on their first US tour.
August:
The 2-month tour includes four sold-out nights at L.A.'s Whiskey A-Go-Go; a support slot to Mott The Hoople at Madison Square Gardens; an appearance on Burt Sugarman's 'Midnight Special' TV show, performing 'Personality Crisis' and 'Trash'. The Dolls are at their height, and the toast of New York.
Malcolm McLaren visits New York to exhibit 'Let It Rock' designs, meets the Dolls who already love his clothes, they take him under their wing to endless parties, introduce him to countless celebrities.
October:
31st: Halloween is celebrated with a 'costume ball' in the Grand Ballroom of the Waldorf Astoria Hotel, before flying to Europe. The band smash some plate glass windows, go on 2 hours late, and truncate their set. Howard Stein says he'll never book them again.
November:
2nd: Their gig at the Paris Olympia Theatre gig is videotaped for French TV, but never shown due to a police riot being censored! Also filmed for a 2-hour French documentary that never surfaced. (Or was this DECEMBER 2nd?)
26th & 27th: In London, they play 2 nights at the Rainbow Restaurant on the roof of Biba's Boutique (the ultimate fashion shop had taken over a department-store), making an event instead of a gig. McLaren is now so impressed that he goes on their tour of Europe.
28th: They perform 'Jet Boy' and 'Personality Crisis' on the Old Grey Whistle Test TV show, after which 'whispering' Bob Harris describes them as 'mock-rock'. The show is seen by thousands of UK youngsters, later recalled as a turning point for many of the future punk generation.
December:
In Paris, Johnny throws up arriving at the airport, in front of a massed media reception. At the gig he smashes his guitar over the head of a spitting fan.
In Germany, they are filmed for the 'Musikladen' TV show. In the US, Circus magazine votes the New York Dolls the best new group, however Creem magazine votes them both the best - and the worst - new group of 1973.
Back in France for Christmas and New Year, two gigs later appear as bootlegs: 'Live In Paris' (on 23rd Dec.), and 'Trash (Don't Take My Life Away)' from New Year's Eve.

My name is Michael Thimren and I played giutar in his band on a off between 83-88.I talked with Johnny about giutars and stuff and he showed me how to play some Dolls songs right, like Babylon,Jet boy and others.The giutar he used for the first album was a black Dan Armstrong(same as Keith, but his was look through model)you could switch the pick ups easy, but johnny only used the one with most distortion.When I first meet him he played a Gretsch George Harrison model similar to Chet Atkins model, with a wang bar and dark brown.I asked him why he used that kind of giutar and he said.That his beloved Les Paul TV junior had been stolen in england and he was looking for one.When I later become giutarplayer for him he had find one.Hes regular choise of amps was Fender Twin reverb,at least two serie connected with Volume, master volume, treble, reverb on ten and other controls at zero.Sometimes he had tree and a marshall stack, but he allways had a great giutarsound.

Hello Everybody,
My name is Mrs Sharon Sim. I live in Singapore and i am a happy woman today? and i told my self that any lender that rescue my family from our poor situation, i will refer any person that is looking for loan to him, he gave me happiness to me and my family, i was in need of a loan of $250,000.00 to start my life all over as i am a single mother with 3 kids I met this honest and GOD fearing man loan lender that help me with a loan of $250,000.00 SG. Dollar, he is a GOD fearing man, if you are in need of loan and you will pay back the loan please contact him tell him that is Mrs Sharon, that refer you to him. contact Dr Purva Pius,via email:(urgentloan22@gmail.com) Thank you.