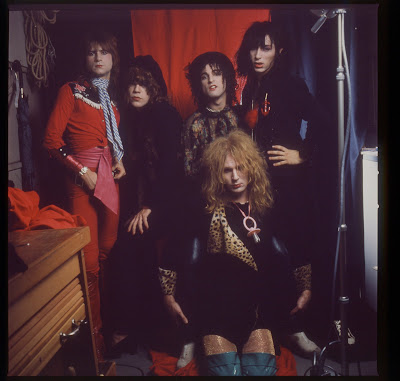 February:
Malcolm McLaren turns up, fills a vacuum, and injects enthusiasm. Under his persuasion and sartorial guidance, they present the 'Red Patent Leather' shows, complete with Chinese revolutionary communist flags and VIVIENNE WESTWOOD red designs.
Bob Gruen again is filming the Dolls, this time a new project with a 3-D process(!), (or was it Canadian film crew?- MM in W.Ways) provisionally titled 'Trash'. It was never completed.
March:
Four shows at the New York Little Hippodrome Club (starting Feb. 28th) go down so well that more are booked for the following weekend - with Television supporting. However, the rock media reaction to the hammer and sickles reflected American communist paranoia- the Vietnamese war was still on. These are the last ever New York appearances of the New York Dolls. The show of March 2nd is released years later as 'Red Patent Leather' on Fan Club (via New Rose, France), and in '92 enhanced with extra tracks, in the USA on Restless.
April:
The Dolls attempt a tour of eight dates in Florida, with Malcolm McLaren. But Johnny and Jerry split from the band in the middle of the tour, from Jerry's mother's house in Tampa.
Johansen & Sylvain continue the 'Dolls' for a Japanese tour and other dates, struggling on until December '76.
11th: Johnny and Jerry form THE HEARTBREAKERS, together with RICHARD HELL, former bassist with Television. They'd talked the month before at the Hippodrome gig; he'd left Television two days earlier.
May:
29th: The Heartbreakers' first ever gig is in Queens, NY.
June:
Former Demon's guitarist WALTER LURE is added to the band as second guitar and vocals. July:
7th: Their second gig with Walter Lure is at CBGB's, which soon becomes the breeding-ground for upcoming New York bands. A recording of the gig appears in 1992 as a short-lived CD issue on Greg Shaw's Bomp label, titled 'What Goes Around'.
August:
Mercury officially terminate the New York Dolls agreement.
November:
16th: Peter Crowley, later of Max's Kansas City, books the Heartbreakers at Mothers, NYC. Three tracks from this gig are included on Bomp's 'What Goes Around' CD.