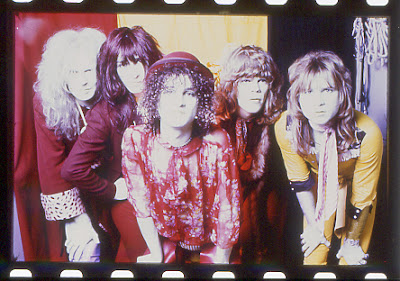 January:
Back in the USA they start recording their second album 'Too Much Too Soon' with Shadow Morton producing.
February:
11th: A St. Valentine's All-Night Party at the Mercer Arts Center.
15th: At a New York Academy of Music gig, they are preceded by a friend and official Dolls photographer Bob Gruen's film that he has made of the band over the past year.
Spring:
They perform at a transvestite bar, the '82 Club', N.Y.C, in full drag.
July:
'Too Much Too Soon' album released. It peaks at no. 167 in the Billboard chart, shipping 58,000 copies.
The Dolls begin a national US tour- their last. A poor quality bootleg, 'Dallas '74', documented it.
August:
In L.A., they were filmed acting as a trashy 50's N.Y. street gang, by Fritz The Cat director Ralph Bakshi. When the film, 'Hey Good Looking' finally appeared in 1982, all their footage had been cut out. Bob Gruen also filmed them 'dressed to kill', and some of his footage is used interspersed with Don Kirshner's Rock Concert TV programme.
Four gigs are booked at the Roxy, although the first is a sell-out the other three get cancelled.
A third trip to the UK is cancelled due to visa problems.
Other problems abound; excess drugs and drink were beginning to take their toll. Johnny and Jerry get into shooting heroin, Jerry gets hepatitis, Arthur has a stand-in due to his alcoholism; Peter Jordan, who sometimes plays Arthur's bass lines from back-stage.
October:
Marty Thau falls out with Leber & Krebs- it's he who has to keep coming to them for more money to support the band's expensive lifestyle. Leber and Krebs want the Dolls to drop Thau, they refuse, but reach an impasse.
Mercury Records start asking for loans and advances to be repaid before another album is recorded. 'Their record company eventually grew to hate them', says Paul Nelson. It seems that the Dolls have used up all their credit.
November:
Suspended by Mercury, ignored by their management, the future looks bleak.
December:
Malcolm McLaren has turned up in New York, fills the vacuum and injects enthusiasm. Although Dollhouse are still officially the management, he sets to work relaunching them, first enrolling Johnny and Jerry in a methadone clinic, checking Arthur into a detox centre

Peter Jordan wasn't there because of Arthur's 'Alcoholism'-he was there because Arthur's wife took a knife to his hand,to try and prevent Arthur from going on tour.
Get yer facts straight,mate.

This is such favorite blog looking too much option for traveling visit here. online taxi booking in delhi