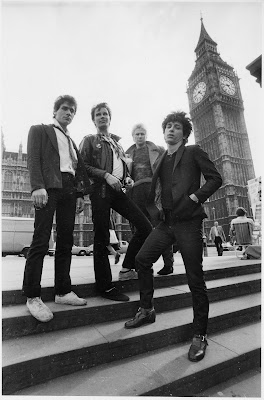 February:
20th- 22nd: Demos are recorded at Essex studios prior to sessions for their debut album. Three tracks are later released as 'Vintage '77' on Jungle Records.
Nancy Spungeon arrives in London looking for Jerry Nolan. She is desparately avoided by the band and blocked by Leee who fears her influence, she finds herself a Sex Pistol instead.
March:
15th: Two sets at The Speakeasy, London, are recorded by Track Records, later released by Jungle Records as 'D.T.K.'.
The gigs are a warm-up for the 'L.A.M.F.' recording sessions: they then go into Essex Studios and record All By Myself, Let Go, Get Off The Phone, I Wanna Be Loved, Can't Keep My Eyes On You, and I Love You with producer Speedy Keen, the vocalist and composer of Thunderclap Newman's Something In The Air.
At Ramport Studios they record eight more: Going Steady, Baby Talk, Do You Love Me, Born To Lose, Chinese Rocks, Pirate Love, It's Not Enough and One Track Mind.
22nd: At Ramport Studios, they begin their lengthy mixing sessions with Speedy, starting with five numbers including Baby Talk and Going Steady.
29th: More mixes at Ramport.
April:
13th: A 'Letter of Intent' with Track Records' Chris Stamp Band Limited is signed prior to the full agreement. It's for two albums per year for three years; neither band nor company exist beyond the first album.
28th: 'Heartbreakers Limited' is incorporated in the UK (and 'Inc.' in the USA) by Leee and partner Peter Gerber, intending to branch out and handle other artists.
May:
After a tour of Holland, Belgium and France, they go back to mixing, and now decide to try out different studios.
16th: At Olympic Studios, mixing All By Myself and Get Off The Phone, the engineer marks on the tape box as the title: '2 downers before the overdubs'.
19th: Olympic Studios, mixing Going Steady.
24th: Now at Trident Studios, mixing Baby Talk and Going Steady.
June:
1st: Back to Ramport Studios: mixes of One Track Mind and It's Not Enough.
3rd: The Heartbreakers fingerprints are taken by Leeds police after the band get held up at gun-point in their hotel-room. The prints get used on the Track Records 'L.A.M.F.' cover.
5th: Ramport Studios: more mixes of Baby Talk and Going Steady.
7th: Ramport Studios: mixes of Do You Love Me and Pirate Love.
8th: Ramport Studios: mixes of Pirate Love and All By Myself.
10th: Ramport Studios: mixes of I Love You, Let Go and Can't Keep My Eyes On You.
11th: Ramport Studios: mixes of I Love You and Let Go
22nd: Ramport Studios: mixes of One Track Mind, It's Not Enough, I Love You and Do You Love Me.
July
2nd: Ramport Studios: mixes of Pirate Love and Let Go.
4th: The Heartbreakers open the Vortex Club in Wardour Street, with The Buzzcocks.
22nd: Ramport Studios: mix of Baby Talk.
August:
16th: Johnny gets married to Julie.
September:
10th: Now they try Advision Studios: mixes of Baby Talk, Going Steady and One Track Mind.
15th: Advision Studios: yet more mixes of Baby Talk and Going Steady.
October:
3rd: The Heartbreakers set out on a UK tour to promote the release of 'L.A.M.F.' on Track Records. However, the mix on the album is universally greeted with disappointment, and Jerry Nolan quits the band over the issue. Sex Pistol Paul Cook substitutes for him, accompanied by Steve Jones. Jerry re-joins, but with a terse statement that it's 'as a hired musician, not a member, on a temporary basis.'
13th: Middlesborough Town Hall
14th: Edinburgh Clouds
15th: Manchester UMIST
17th: Stafford Top O World
18th: Cardiff Top Rank
20th: The tour reaches its London climax, where they headline at the Rainbow, with Siouxsie and the Banshees plus The Models supporting. They kick off their set by smashing a plate glass window conveniently set up on stage, with a brick.
21st: Leeds Polytechnic
22nd: Bath Pavilion
23rd: Shrewsbury Tiffanys
25th: Birmingham Barbarellas
26th: Liverpool Erics
27th: Coventry Locarno
29th: Newcastle University
November:
Jerry Nolan carries out his plan of leaving the band. He's replaced by Terry Chimes, formerly of The Clash. Track Records issue the single 'It's Not Enough', just before the label going under. A couple of shows at the Vortex are the last the Heartbreakers will play in the UK until 1984.
December:
Without a record company to support them, or the five-year old nucleus partnership of Johnny and Jerry, the band fall apart. Whilst Johnny stays in London, Billy and Walter fly back to New York for Christmas, not to return.
A possible new record deal with CBS collapses, and Leee quits as manager.