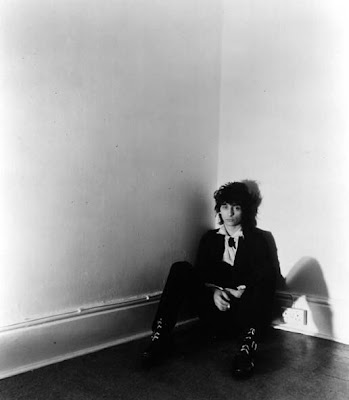 January:
'The Speakeasy' in London was a late-night drinking club inhabited by the music business: musicians, managers, agents and record company executives; plus roadies, groupies, druggies and wannabees made it an essential hang out.
A notorious incident involving Sid Vicious mugging prog rock DJ Bob Harris there (he of the 'mock-rock' Dolls jibe) was the catalyst for the '77 crowd to invade the previously hallowed hall of the flares and spliffs fraternity.
Johnny puts together some gigs there with musicians he's been hanging around the club with, under the names 'The Living Dead' and 'Johnny Thunders' Rebels'. Members come and go as other commitments allow, they include: Steve Jones, Paul Cook and Sid Vicious from the Sex Pistols, Peter Perrett and Mike Kellie from the Only Ones, Patti Palladin from Snatch, Henri-Paul, Andy Gray and Steve Nicol from the Hot Rods.
February:
18th: A Speakeasy performance as The All Stars Living Dead with the Only Ones' Peter Perrett, Mike Kellie and Alan Mair, plus Patti Palladin, is recorded and makes it onto a double-7" bootleg 17 years later.
The impromptu gigs result in Johnny landing a solo deal with Real Records, through WEA. Owner Dave Hill has just left the failing Anchor Records, and Johnny is to be his first release. His second signing is The Pretenders, whom he then goes on to manage for many years. Most of the Living Dead appear as guests on the album, 'So Alone'.
March:
The Living Dead play 3 dates at the Gibus Club in Paris, as well as continuing dates at the Speakeasy.
17th: 'Chris Stamp Band Limited', the Track Records company that the Heartbreakers are signed up to, goes into voluntary liquidation at a meeting of creditors.
April:
7th: Accountants handling the liquidation of CSB Ltd (Track Records) find that the Heartbreakers have spent £29,283.76 over and above the contractually due £50,000. They rather hopefully write a letter to Leee, demanding repayment within 14 days failing which they will place the matter in the hands of solicitors for recovery.
May:
26th: The single 'Dead Or Alive' is released on Real Records.
June:
The recording of 'So Alone' at Island Studios. Johnny is joined by his 'Living Dead' cronies, plus Walter and Billy from the Heartbreakers, Phil Lynott, Chrissie Hynde, and Steve Marriot, no doubt all dragged down from the Speakeasy.
August:
Back in New York, Johnny, Billy and Walter earn some money by playing a Heartbreakers re-union (with Ty Styx on drums) at Max's Kansas City, later to be released as a live album.
October:
6th: The album 'So Alone' is released on Real Records.
9th: Johnny arrives back in London for the 'Johnny Thunders' Allstars' concert at the Lyceum that's been arranged to promote the album.
12th: The Lyceum concert features Peter Perrett, Patti Palladin, John Earle, Mike Kellie, (but who's on bass… Paul Gray? etc?)
13th: In interviews (with Sounds and Zig Zag), Johnny talks about his friends Sid and Nancy who've just made headlines with Nancy's death and Sid's arrest for murder. Asked of his plans, he says:-
"My dream come true. I've got someone to finance me to go to New Orleans and I'm gonna try and find a bunch of old black musicians and start a a band with them. New Orleans is full of the greatest music you ever heard in your life."

I saw the Heartbreakers show at the Lyceum,it was Paul Gray on bass.Great gig,Perrett was out of it
but like Johnny was excellant.About a week before me and my mate met Cooke and Jones outside an illegal all night off-licence,they were with
Phil Lynott and Paul Gray-"The Greedy
Bastards".We asked Cooke and Jones if they were going to do the So Alone gig,they said Malcolm didn't want them to do it.I didn't understand the politics of this at the time,I sure do now.They were surprisingly friendly,and shared my love for the New York Dolls.