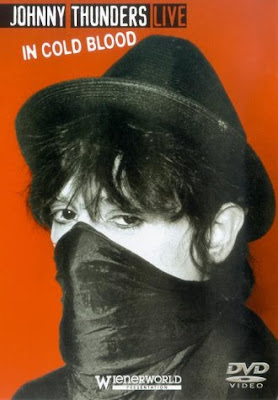 February:
Johnny has now sold his guitars for drugs and living in a squalid New York basement.
Wayne Kramer's ex-wife, rock photographer Marcia Resnik, introduces Johnny to CHRISTOPHER GIERCKE, an underground film-maker, who's interested in working with Johnny on a film project and takes him under his wing.
In 'Wired', the biography of John Belushi, Bob Woodward relates how on the 28th, Marcia took Belushi to Christopher's New York apartment, five days before Belushi's death in Hollywood. Woodward comments dramatically: "Giercke represented an extreme of counterculture. He was the rebellion and the underground that Belushi flirted with, the hardcore."
March:
At Euphoria Sound Studios, Revere, Johnny records 'Diary Of A Lover', 'Look In My Eyes' and 'Green Onions', with Rolling Stones producer JIMMY MILLER. Musicians: Walter Lure & Billy Rogers.
Then with Nolan & Sciorrci, Johnny finishes the 'Too Much Junkie Business' recording sessions and flies to Sweden for a TV show, at Mandasborgen:-
Scandal in Sweden:- Johnny hits the front-page headlines, with the tabloids screaming: "Burnt Out, Wasted, A Drugged Human Wreck". They continue for the best part of a week.
23rd: More front page headlines: "I Don't Have The Strength To Play Tonight", and eventually:
"Police Arrest Pop Star".... Johnny is caught by the tabloids in a double-page spread - photographed in a classic "who, me?" pose when being confronted by a policeman and an air stewardess showing him an airplane medicine box, that someone has rifled and stolen all its drugs ...
April:
Johnny is in London for a tour of the clubs (Hope and Anchor, Kensington, Rock Garden).
22nd: At the Venue he's joined onstage by Sylvain Sylvain, who can't hide his amusement when Johnny can't remember the chords to 'Chinese Rocks'. A Michael Beal photograph (featured in Nina Antonia's biography) shows him back-stage being held up by his band - by now TONY JAMES (former Generation X, future Sigue Sigue Sputnik & Sisters Of Mercy bassist), STEVE NEW (former Rich Kids guitarist), and Jerry Nolan.
Together with three other former Fresh Records employees we form JUNGLE, and buy the Fresh label from the owner.
June:
3rd: The last UK date before flying back to Sweden with Tony and Jerry. Jerry meets Charlotte, who runs a fanzine. They soon are to marry, and Jerry stays in Sweden.
On his return Johnny gets busted at Heathrow for possession of a small amount of heroin, and is thrown into Pentonville Prison for a few days.
At Wickham Studios, three tracks are recorded as demos: 'Sad Vacation', 'Give Me More' and 'Ten Commandments Of Love'. The eventful European trip comes to a close, and Johnny returns to New York.
July:
Gig at the Peppermint Lounge with Walter. (Or is this the 15th?)
15th: Johnny's 30th birthday is celebrated with a gig at the Irving Plaza, NYC., the same day Christopher Giercke formalises a management agreement with Johnny, forming a close partnership that is to last for three years.
August:
6th: A gig at Jonathan Swifts club in Cambridge (USA) is recorded and later released as an extra live album with 'In Cold Blood', on New Rose Records.
A Swedish TV crew turn up to interview Johnny- his live TV recording there was taken off the air, they're turning it into a semi-documentary piece about the dangers of drugs.
September:
30th: A gig at the Mudd Club is filmed and recorded for Lech Kowalski's movie, 'Stations Of The Cross'. It is later released on ROIR Cassettes under the same title.
October:
At Downtown Studios, Boston, Johnny records another two numbers with Jimmy Miller: 'In Cold Blood', and 'Just Another Girl', later coupled with the Euphoria Sound Studios tracks to become the 'In Cold Blood' mini-LP (and issued as 'Diary Of A Lover' in the USA).

The photo showing 'Johnny being held up by his band' was not taken backstage at the Venue. It was a different line up that played at that show. The pic would have been taken the following month - early May 82.

Thanks!
Thunders detectives at work.

No problem man. Although if you worked with JT from 1982 onwards as you say it’s kind of surprising you didn’t know that. There is so much mis -information and endlessly repeated inaccurate quotes by so called 'Experts' still floating around that it only adds to the confusion about Johnny’s life. Thankfully the fans that were there know the facts and have largely remained loyal.

Jerry and Charlotte met in March at the Mandagsborsen tv show. They married in June 1982.

I met Johnny Thunders in 1982, he was sitting on a curb in Copenhagen waiting for the bus to take back him to town from Christiania. He told me the story of how Swedish TV turned his interview into a documentary about rock stars and drug addiction. He was very upset at being used like that.

And you spilt my drink