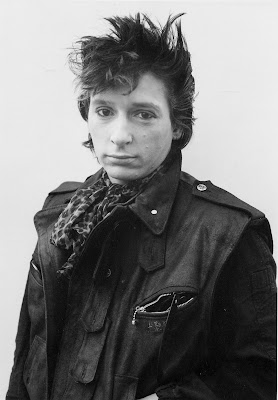 May:
'Vintage '77', a 12" single featuring three demos from prior to the 'L.A.M.F.' sessions, is released by Jungle.
October:
I meet Johnny and Christopher for the first time. At first there's a lot of questions about the deal with Leee for the Track tapes, but Leee searches for documents to prove the rights reverted to his management company when Track folded.
9th: At the Lyceum, London, Johnny headlines a packed house. In the band are Jerry, Billy Rath, and Michael Thimren from Sweden; encore guests are Peter Perrett and Patti Palladin. In the audience are Siouxsie & The Banshees, The Damned and many other London luminaries, and Johnny puts on a great show. Supports are Jayne County and Turkey Bones & The Wild Dogs.
10th: Christopher makes a deal with us for Johnny to re-mix 'L.A.M.F.' to coincide with a Heartbreakers re-union tour in March. In the same week he makes another deal with promoter John Curd for a live recording of the Lyceum show. Jim Robertson at PAN Agency (later at ITB and JLP) becomes Johnny's booking agent.
Christopher arranges for Johnny to see a top Harley Street doctor to treat his drug addiction. The doctor, a now retired psychiatric specialist in addiction cases, prescribes Johnny methadone. The treatment continues for most of the rest of Johnny's life, visiting London every two or three months for an appointment and prescription. The situation is far more civilised than in New York, where junkies are made to queue every day for their methadone ration.
Later in Paris, Johnny goes into Studios W.W. to record the semi-acoustic 'Hurt Me' album for New Rose Records.
November:
After completing the 'Hurt Me' album, a projected UK visit is postponed due to lack of a work permit.
December:
A couple of low-key gigs in the UK herald the release of 'Hurt Me': at the Brighton Escape Club (5th), Dingwalls (6th) plus an acoustic set afterwards at the 'Pipeline Club' at Gossips which has a tiny, restricted view stage. Many people go home from the tiny packed club after hearing the DJ play the 'Hurt Me' test-pressing thinking it was his live set!; Johnny doesn't actually go on until nearly three in the morning.
Johnny returns to Sweden to spend Christmas- he's met Susanne Blomqvist there, and they've fallen in love.

Love Johnny to bits, but his taste in women was bad beyond comprehension. He was Johnny Thunders for god's sake, and he could have had beauties. Guess the junk blinded him to these dogfaced beasts.

Yeah, can't argue with anonymous above. I think the 70's in general celebrated white trash-looking blondes with no bodies whatsoever. I also think junkies just hook up with other junkies or any skank who will buy them junk. The swedish one and that filth sable starr were two of the ugliest broads i ever saw, and they look alike! Guess he went for that type. He also carried on with johansen's wife who was a royal dog as well.

His Swedish girlfriend was quite pretty and his daughter ain't bad, either.

I was at the Gossips show but went home because we thought Johnny wouldnt turn up. I saw him a few times in London during this period quite a few of the gigs dont seem to be on the gig lists ive seen or maybe its my memory. Any one remember when he played at Dingwalls in a pink suit and there were only aboout 30 people there (including Lemmy :)